A panel discussion on “Irom Sharmila, the Iron Lady: A closer look at her 16-year fast against Armed Forces Special Powers Act” was organized for the students of Atma Ram Sanatan Dharma College on 27 September 2016 by North-East Welfare Committee, ARSD College. Mr. Gautam Navlakha (former editorial consultant), a civil rights activist, Dr Lungthuiyang Riamei, Assistant Professor, (Dyal Singh College) and Dr I.M. Jha, Associate Professor (ARSD College) were invited to be the panellists. Dr Achingliu Kamei, the nodal officer for the North-East Welfare Committee, in her introductory speech said that such interface was created to bring about better understanding of the people of the North-East and the issues faced by them. She further said that the Committee will have talks in the coming years featuring important personalities from different walks of life from the North Eastern States to bring about positive understanding of the people and bridge the gap of knowledge.  Dr. Gyantosh Kumar Jha, Principal of the college said that such interface for the student community will foster goodwill and a deeper understanding of each other. He commended the initiative taken by the Committee. The panellists gave very deep analyses of the issues pertaining to AFSPA. During the discussion time, which was very well attended by students from across all disciplines. Many questions were raised by the students, as well as the teachers. The students had a very inspired and enriching time of learning. Mr. Ajeet Kumar, member of the Committee thanked the untiring support of the Principal of the college to build up the student community. 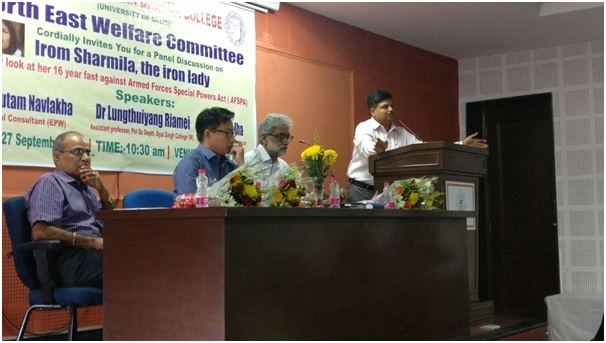 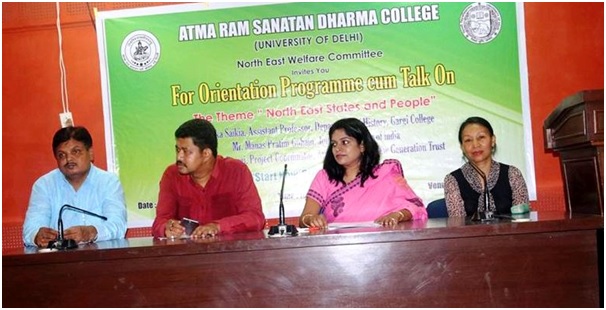 A movie screening and a talk was held on the 23rd of February 2019 for the students of ARSD College organized by the North East Welfare committee as part of the annual North East cultural fest, Rainbow 2019. Dr Ramananda Mayanglangbam Singh of Kirori Mal College was invited to be the resource person for the talk. The film selected for the occasion was “Loktak Lairembee: Lady of the Lake” based on the unique Loktak lake of Manipur. It is a film which won Best film on Environmental Conservation at the 64th National Film Awards, 2016, loosely based on the short story, ‘Nongmei’ by Sudhir Naoroibam. The talk and discussions post screening of the film brought out the many facets of the film. The ecological issues of the floating biomass Phumdis; the precarious life of the fishing community on Loktak lake; the flip side of the government’s developmental activities; the State’s apathy and ruthlessness; the trouble people faced in self-employment; people’s resistance and the fears and anxieties the flashpoints and conflicts can unleash in the mind of a sensitive individual; the life of the hard working women of Manipur, etc The student community had a great time interacting with one another.