Prof Mul Chanda Sharma is a political science graduate of our college. He served University of Delhi as Professor of law, and as vice chancellor-National Law University, Bhopal and Central University of Haryana. Prof Sharma worked with UGC in various capacities. He has over three decades of teaching and research experience. To his credit are published five books, and a large number of articles in journals of national and international repute.His name is associated with numerous scientific and policy initiatives at various levels: Research director and Adviser of Ford Foundation and NHRC, respectively; making of policy for entry and regulation of foreign education providers in India; Public liability law; fabricating PPP Model for infra-structure development; IPR Regime; framework of Ombudsmen scheme (as chairman) for implementation and monitoring of schemes under MNREGA, among others.Prof. Sharma has recognition worldwide for his contributions in legal field. He is a Doctorate in Judicial Sciences (SJD) from North-Western University Law school, Chicago, also he is senior Fulbright fellow. He has been fellow of several other reputed institutions like University of Leiden, Vermont University, University of Chicago, George Town University, and University of Kentucky. At present, Prof Sharma is a full-time member of Law Commission of India.

He has been a student of department of history from our college.He has shown his calibre in both mainstream and parallel cinema for his portrayal of  Shahid Azmiin in critically acclaimed ‘Shahid'(2013). He has won National Film Award for best actor and Filmfare critics Award for best actor for his role in “Shahid”.  He won Filmfare Award for the best supporting actor for his role in  ‘Bareilly ki barfi (2017).Rao went on to feature in the successful romantic comedy Queen (2014) and starred in the acclaimed dramas CityLights (2014), Aligarh (2016), Trapped (2017) and Omerta(2018); Trapped earned him another Filmfare Critics Award for Best Actor. For playing an uptight government clerk in the black comedy Newton (2017), Rao was awarded the Asia Pacific Screen Award for Best Actor.Raj Kumar Rao, an integral part of our college dramatic society (Rangayan) too, participated in a play-“Ek tha Gadha” in 2003 and “Muabje” in 2004 under the direction of Sri Satish Anand. It was performed at L T G Auditorium.

Jaspreet jasz, a graduate of our college, alias Jaspreet Singh Kohli is a vocalist. He stepped in Bollywood as vocalist with film ‘Dil Kabaddi’ in 2006. It was followed by his first project with A R Rahman another music maestro the title track of movie ‘Blue’. Rahman introduced him to world audience with ‘Nimma Nimma’. It was featured in the ‘Isles of Wonder’ sequence directed by Danny Boyle at 2012 summer Olympics.

Rushali Rai is the model turned actress who featured  in the Femina Miss India in top 6 in 2015, Femina and won coveted Femina Miss Delhi, 2015.She has been a face of Fab India, Jabong , Snap Deal , Kingfisher , Shagun jewellers and many more brands to her portfolio. She also featured in editorial Men’s Health Magazine, India Times, B’ Today, maxim. She has also worked with top designers like Rohit Bal, Ritu Kumar, Harpreet & Rimlpe Naurla, Gaurav Gupta, Rezza Jaipur and Various Jaipur designers. 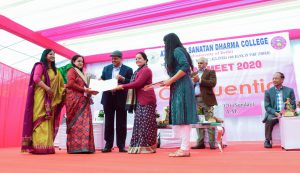 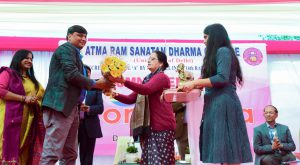 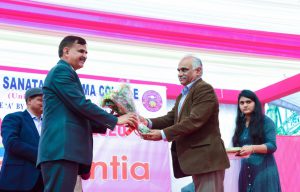 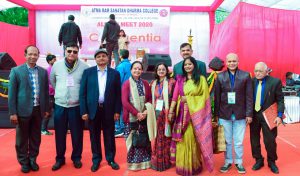 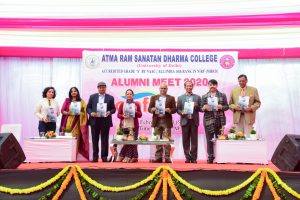 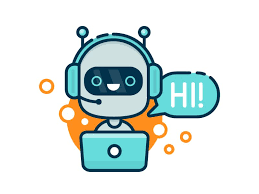